We are the authors of the Spring Platform, a group of DSA chapter leaders who have been meeting informally to trade stories about the day-to-day reality of running a DSA chapter and what we need to grow strong locals. The Spring Platform is our way of sharing what we’ve learned with the rest of DSA leading into the August 2017 National Convention.

Jeremy Gong is the Co-Chair of East Bay DSA, and has been outspoken in pushing socialists to lead the fight for single payer healthcare. He has helped build a highly successful chapter canvassing program that includes organizer training and political education. Hundreds of canvassers have so far joined East Bay DSA in agitating for the California single payer bill, SB 562. Jeremy has worked as an organizer, most recently for the Sierra Club.

Natalie Midiri is a community organizer, educator, and Co-Chair of Philly DSA. From 2013-2016 she was a teacher at the Collingswood Playschool, a democratically run member cooperative daycare program. She has worked on SEIU’s Fight for $15 fast food worker campaign and at the Philadelphia Unemployment Project, an unemployed worker’s council for low-income Philadelphians. In DSA, she’s served on the Amendments and Resolutions Committee for the 2015 National Convention, helped organize YDS conferences, and launched Philly’s cadre bootcamp. 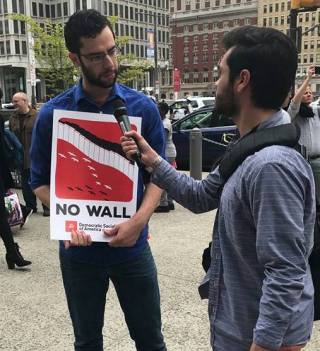 Adam Goldman is a community organizer and Co-Chair of Philly DSA. Since 2012 he has worked at the Philadelphia Unemployment Project, an unemployed worker’s council for low-income Philadelphians, where he has organized the unemployed, low-income workers and homeowners in campaigns for extended unemployment benefits, a fair minimum wage and foreclosure relief. In DSA, he’s chaired the Philly DSA “We Need Bernie” campaign and organized Philly DSA’s 2016 cadre bootcamp.